You are here: Home › Blog › Popcorn, hold the butter
By Gretchen on December 6, 2013 in Crochet, Crocheted Popcorn, Freeform, Stitches 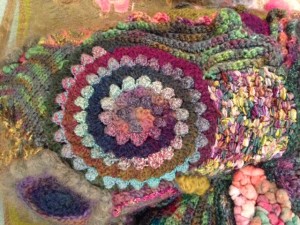 A favorite crochet stitch that “pops” up in a lot of my Freeform pieces is this little bobble I call a “popcorn”. It isn’t the traditional one that most people do, I don’t think. Maybe we should call it a “kernel”, instead, because it is a tighter little nubbin than the usual. It is really a cross between a cluster and a popcorn, with a twist. In the photo, above, it is worked in between the rows of double crochet in a spiral. 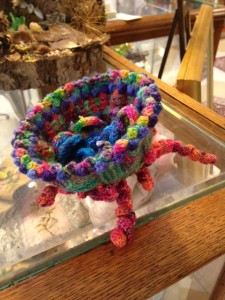 Popcorns can emphasize a line and add movement to a piece. They stand above the plane of the work, adding delicious dimension and texture wherever they go.

They consist of groups of unfinished double crochets, and here is how to make one:

Begin on the wrong side of your work, because these little guys will “pop” away from you. You will have one loop on your hook (from the last stitch, from your foundation chain, or from a starting loop drawn up a stitch or so away from the site of your new popcorn).

1. Wrap the hook once and insert into the work, draw up a loop. This makes 3 loops on your hook. (3 loops)

3. In the same space, repeat steps 1 and 2 two more times (up to 5 times is my max), gaining more loops on hook each time.

4. Draw a new loop through ALL the loops on your hook, then make a tight chain.

5. Slipstitch into the base of the popcorn (the same space where all the unfinished double crochets were made) to pop the stitch forward.

When working rows of popcorns, skip a stitch or two between them (depending on how fat they are). If working one row on top of another, make them in between two popcorns of the previous row. Make pyramids by starting between the first and second popcorn of each row. Put a pyramid into those odd, triangular spaces that happen so often in Freeform. Change colors on each row. Stick them in between rows of other shapes. Scatter them everywhere for dimension and texture.

Flowery Friday
A Season of Wonder

One Response to Popcorn, hold the butter