You are here: Home › Blog › A Season of Wonder
By Gretchen on December 6, 2013 in Creative Thought Process, Favorite Books, Giveaways!, Illuminated Manuscripts, Inspiration

In the spirit of the season, I would like to announce our final book giveaway of 2013. This time it is a brand-spanking-new-in-the-wrapper, hardbound book called “I Wonder”. It is a highly original work unlike anything I have ever seen. I call it a “thinking” book, because it must be read to be completely appreciated. The illustrations are all works of art by the author, Marian Bantjes, who might be called a typographer or a graphic designer; but, I just call her an artist. Many of her works remind me of Illuminated Manuscripts, but they are a completely original take, light-years from the early works. (And, that’s not all she does, by far!!) 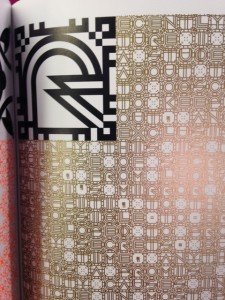 I’d like you to hear a word from Marian, herself, and from Stefan Sagmeister who wrote the Forward:

First, Marian: When approached by the publisher about “doing a monograph of my work…………..I didn’t believe I was ready for a Tome, and proposed instead this quirky idea of a book – a book that was difficult to define, and required a certain leap of the imagination to understand without seeing it in its entirety.”

From Stefan: “Marian’s work might be my favourite example of beauty facilitating the communication of meaning………The expectations raised by her immaculate form are matched by the significance of the content…It’s like meeting a supermodel who turns out to be a neuroscientist……………. It’s not only wonderful, but full of wonder.”

I’ve said this before, in regard to this book – it is difficult to show you anything more without fear of spoiling your adventure. There is something here for everyone willing to be drawn in to the magic. This is a book to savor before the fire with a cup of tea and a whole afternoon ahead of you. This book gives me goosebumps!

Here’s a little bonus for all of you that will be assembling Christmas gifts, soon – Instructions for assembling bookshelves from IKEA, Marian Bantjes-style:

These actually make perfect sense, but I only showed you half the page…..:-)

Popcorn, hold the butter
Dyeing to tell you about it

2 Responses to A Season of Wonder